Applying his passion for computer science and coding, while also aware of the concerning statistics around youth mental health, Om wanted to address the serious issue of bullying in schools. 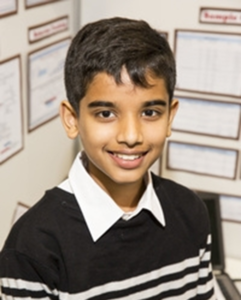 His project, which he developed in two parts over two years, was a technology innovation that supports reporting bullying instances, and allows teachers to take action. More precisely, his application helps identify bad behaviour, follow trends, and to monitor the effects of corrective actions.

In the first year of his project, Om participated in the South Fraser Regional Science Fair, where his winning project earned him a spot at the Canada-Wide Science Fair (CWSF) 2015 in Fredericton. After sharing his innovation with the public and judges, he won a Junior gold medal – but Om was determined to take his idea to the next level. In his second year, he took his project further by developing a web application expansion of his project, which also saw him return to the CWSF 2016 in Montreal.

From his first science fair experience, Om has continued to be curious and follow his passion for STEM, achieving outstanding success through different projects. Most recently, he attended CWSF 2019 in Fredericton, winning a Senior gold medal, scholarships to six different universities, and variety of other awards for his project that developed an AI-powered clinical optimization tool for breast cancer detection.

Om’s advice for others considering a project is: “Don’t give up after something doesn’t work right, or takes ‘too much’ time to implement or figure out, because perseverance, and the effort you make to stand up after an obstacle is what makes a project, a real project.”